This is the best way to see Sydney in all its glory. See full panoramic views of Sydney's eastern coastline including Coogee Beach, Bondi Beach, Manly Cove, Sydney's spectacular Harbour and city skyline, the Sydney Harbour Bridge and Sydney Opera House. This Sydney harbour helicopter tour will leave you breathless! Great views all packed into a 20-minute helicopter joy flight.

Helicopter flight experience begins with a greeting and check-in from the friendly operations staff, followed by a thorough safety briefing in the comfort of our modern and spacious guest lounge.

After the safety briefing, head out to the helicopter and use your own camera for some photos in front of your helicopter before boarding. Cameras and video recorders can be taken with you on the helicopter for more fantastic memories of your flight over picturesque Sydney Harbour and beyond.

Upon take-off enjoy full panoramic views of the Sydney skyline, Pacific Ocean and the historic port of Botany Bay. Within minutes of departure your experienced and skilled pilot will have you above the glistening waters of Maroubra Beach and tracking north along the coast at 500 feet. You will contour fly the picturesque coastline of the eastern suburbs beaches including Coogee, Clovelly and also the world famous Bondi Beach, the aquamarine waters sparkling against the Sydney sun. Admire the spectacular houses of Dover Heights and Vaucluse perched on the chiselled sandstone cliffs as you continue northbound to Sydney Harbour heads and the world’s largest and most beautiful natural harbour.

The experienced pilot will guide your aircraft through the magnificent Sydney Harbour giving you an unforgettable view of icons such as the Sydney Harbour Bridge, Sydney Opera House, Taronga Zoo, Watsons Bay, Rose Bay and Manly Cove. Looking towards the horizon you can see the rest of Sydney stretching out towards the Sydney Olympic site and further afield to the foothills of the world renowned heritage listed Blue Mountains.

As starts the return journey to the heliport you will fly past some of Sydney's great sporting arenas including the Sydney Football Stadium and the Sydney Cricket Ground, as well as Randwick Racecourse. Throughout the flight the pilot will be providing you with informative commentary via Bose voice activated headsets, you will also be able to talk with the pilot and your other passengers whilst on the helicopter. 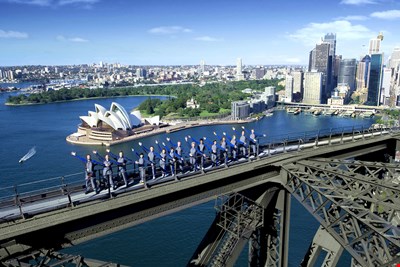