From AUD
$44.00
SAVE TO WISHLIST
ENQUIRIES

As the only aquarium in the world dedicated exclusively to the habitats and species of tropical North Queensland, the Cairns Aquarium connects visitors with the natural wonders of The Great Barrier Reef, The Wet Tropics, The Gulf Savannah and Cape York regions. With over 16,000 animals and unique opportunities to move up close to some of the world's most fascinating, elusive or deadly creatures, every visit is unforgettable.

Every day at Cairns Aquarium visitors are provided with guaranteed interaction with some of the rarest and most elusive animals on earth. The incredible biodiversity of the two adjoining World Heritage listed areas, The Wet Tropics and The Great Barrier Reef provides the cast for a show stopping spectacle of colour, shape and movement that you will never see in another single location anywhere else in the world. 16,000 animals from 10 different ecosystems and 71 habitats across Tropical North Queensland are less than a hand span away and their ever-changing activities and behaviours will keep you mesmerised every time you visit.

Your journey through the Cairns Aquarium follows a drop of rain as it descends from the tropical rainforest covered range, to join creeks, streams and rivers before travelling through the rainforest, across the mangrove flats and coral reef systems before entering the Coral Sea. 10 North Queensland ecosystems and 71 habitats have been meticulously researched so that these natural environments could be recreated in Cairns Aquarium to ensure the ongoing health and longevity of the species on display.

Taking a closer look has its rewards; you might see something you've never noticed before but to really understand the incredible adaptations and behaviours of these creatures you should attend one of the scheduled daily presentations or talks from one of the incredibly knowledgeable AquaNuts.

Seeing is believing but touching creates a lasting impression that will be long remembered. That's why there are two Touch Tanks in Cairns Aquarium where, under the AquaNuts supervision, you can touch incredible creatures from the rainforest and the reef. Lizards, sea stars, sea cucumbers and a host of delicate sea creatures are keen to make your acquaintance so you will love them and want to protect them.

*Reference only and subject to change without notice

Enjoy daily talks and presentations provided by the very knowledgeable and entertaining AquaNuts - they are called that because they are crazy about all things aquatic and when you meet them you'll see and hear that for yourselves!

The Cairns Aquarium has been developed to provide a world class venue for seeing and interacting with the incredible plants, animals, and habitats found only in Australia’s Wet Tropics

We inspire people all over the world to respect, protect and conserve the Great Barrier Reef and the Queensland's tropical rainforest. 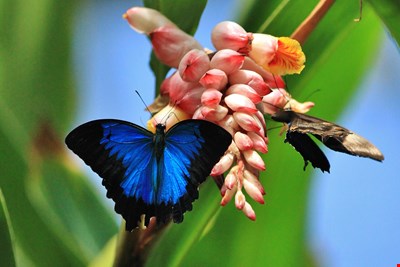